Palmer was established in 1916 as a railway station however in 1935 the Federal government helped relocate 203 farm families from the northern counties of Minnesota, Wisconsin and Michigan in the hopes of creating an agricultural community. The harsh winters took its toll but some thrived, their descendents are still there and agriculture is the main source of the valley's income with real estate coming in second.

We spent two days in Palmer and visited the Musk Ox Farm and the Independence Mine State Historical Park. Musk Ox are very ancient almost prehistoric animals that live in the far north, "including Greenland, Alaska, Canada and Siberia. During the Pleistocene, musk oxen wandered across the Bering Land Bridge to populate North America with the likes of the wooly mammoth, saber-toothed cat, and giant ground sloth. Fossil records indicate the musk ox ranged as far south as France and Ohio during the last Ice Age. The largest wild populations of musk oxen can be found in Canada, especially on Banks and Victoria Islands, Northwest Territory. Musk oxen died off within Alaska by the late 1800's and were reintroduced from wild herds in eastern Greenland in the 1930's. Once in danger of disappearing completely, musk ox populations have made a dramatic comeback with a current worldwide population of about 150,000 animals."

The musk ox adapted to living in the north by growing a layer of under wool beneath their hair. This under wool called qiviut is probably one of the warmest natural materials known. During the 1950's a man by the name of John Teal realized that the Musk Ox could thrive and give Native Alaskan's a cash product. So the Oomingmak, Musk Ox Producers' Cooperative- was started. Now Eskimo woman knit woolen garments made from qiviut to sell.

Gold was an important part of Alaska's history. Even today there are functioning gold miners and prospectors coming to the mountains for the yellow metal. Most of the gold mining in Alaska was placer mining. Placer mining is the kind most of us are familiar with. The miner scoops some sand and gravel into a pan and swishes it with water and gold is left in the bottom of the pan. The other kind of gold mining is hard rock. In this kind of mining gold containing quarts is chopped out of the mine and the quarts is crushed and the gold is chemically separated.In 1906 a miner named Robert Lee Hatcher staked a hard-rock claim in the Willow Creek district not far from where the Palmer station would be placed. Not much was done to remove the gold until 1937 when the Alaska-Pacific Consolidated Mining company was formed and the Independence mine was built. By 1941 there were 204 men employed at the mine and mill. William M. Stoll the first superintendent and major stockholder was advanced for his time. He paid a slightly above average wage, fed and housed his employees and in some cases their families, provided a school teacher for their children and even gave them up to two weeks paid vacation. American school children should be taught more about some of our industrial leaders. Many of whom had amazingly successful Liberal strategies for success. Even Henry Ford wanted to pay his employees enough so that they could afford to buy his automobile. It is a far cry from today's amazingly short sighted race to the bottom. 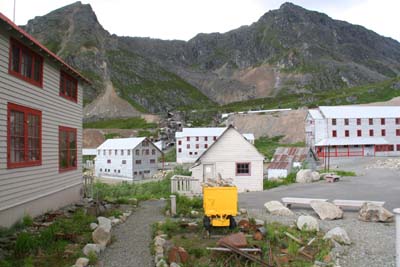 Some of you may remember your Army days with views of the mess hall. This type dish washer was still in use during my 6 months Active Duty tour and the dough mixer is still in many commercial kitchens. 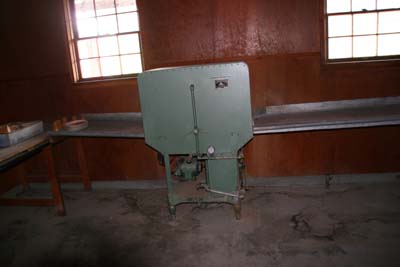 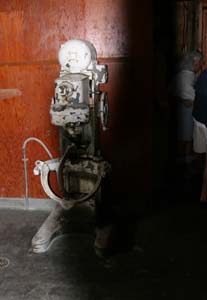 From Palmer we went to Talkeetna for two rainy and cloudy days. Talkeetna is the jumping off place for people wanting to land on or climb Mt McKinley.

"It's not just climbers who make Talkeetna interesting. Equally fascinating are the community's other subcultures: the intrepid aviators forever buzzing overhead as they ferry climbers and sightseers to the mountains, the end-of-the-road bushrats who've come here to carve an unbridled life out of the Alaskan wilds, the seasonal flocks of fresh-faced hippie chicks and nature boys, and the plethora of leftists who've made the Green Party the top vote getter here in past elections"

I don't know maybe it was the rain but I didn't see any of the sub cultures he mentioned. Nor did I see any wildlife on boat tour the guide book recommended about all he got right was the quality of dessert at Michele's Cafe where we went for coffee. 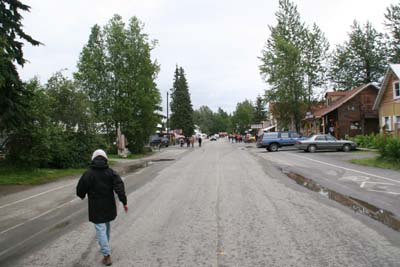 We took the jet boat ride expecting to see lots of wildlife. Unfortunately all we saw was one bald eagle and an empty beavers den along with some recreated Athabascan people's and trappers camps. The beavers den was large so I got some pictures of the insides. 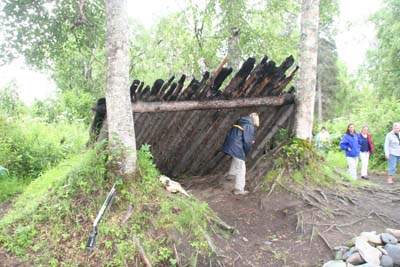 These prehistoric peoples didn't have tools other then fire so they burn 't the ends of saplings and built a leanto. They lived in this all year even in the coldest winter along with some hides and a massive fire. 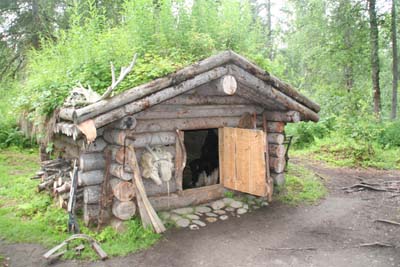 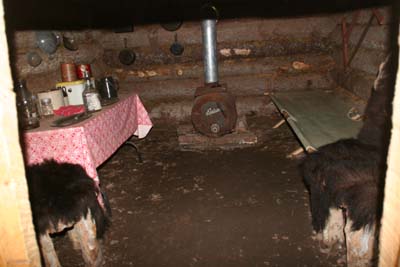 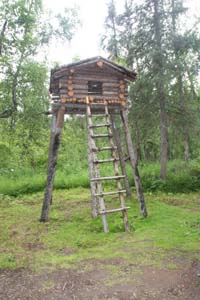 And the trappers cache. You thought cache was a computer term for a place to store files and images when the computer is on them actually it's a French word for a hidden or inaccessible storage place. 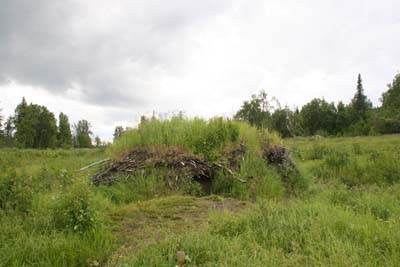 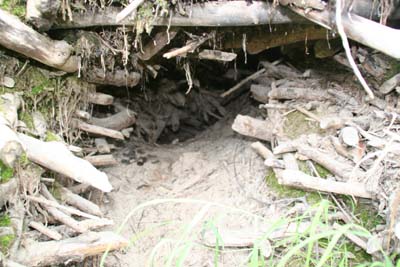 We attended a local performance of "Off the Map" by Joan Ackerman. The show or acting wasn't so good and I was surprised to learn that it had been a movie with Sam Elliot. At some point I have to get the video to see that movie and see whether it was the play or the actors that weren't good.

In the small world category we again ran into friends who were visiting the same town but staying in another campground. We went out for coffee and exceptionally good home made dessert at Michele's Cafe. Michele an ex New Yorker is related to the New York Ferrarer's so it must be in her blood or something.